Viewstamped replication(VR) is a state machine replication algorithm used to build highly available systems that continue to operate correctly even in presence of node failures and network partitions.

It replicates change in state from one node to all other nodes over network.

It differs from Paxos in that it is a replication protocol rather than a consensus protocol: it uses consensus, with a protocol very similar to Paxos, as part of supporting a replicated state machine

VR provides linearizability and it can sustain failure of f out of 2f+1 replicas. 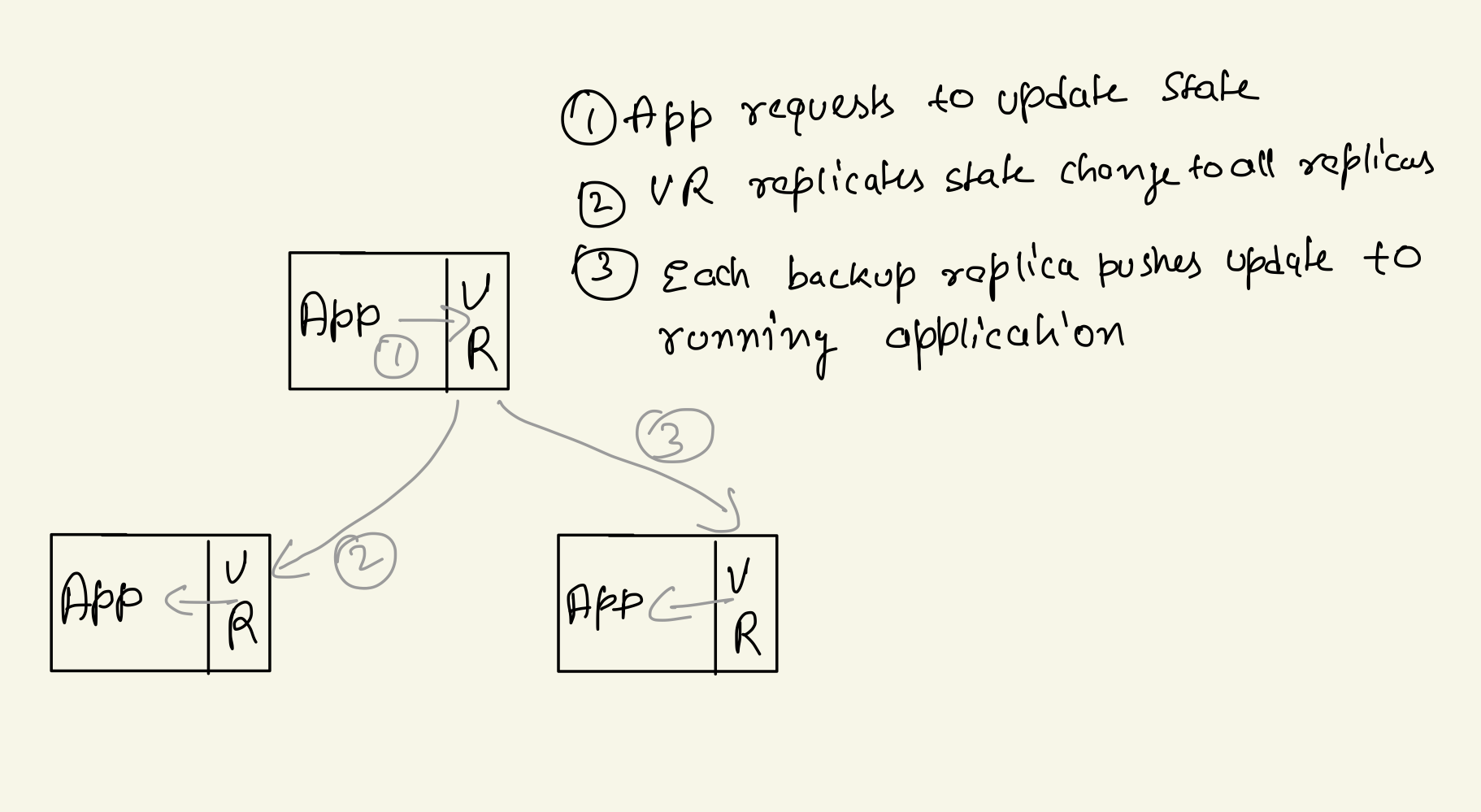 VR has two types of nodes Primary and Backup. Primary receives all client requests in order and then replicates them to backup replicas. All Backup replicas simply accepts requests from primary in order.

If anytime primary crashes or is unreachable over network a new primary is elected by a view change process. View change creates a new view with always increasing view number. View Change ensures that all requests committed(acknowledged) by VR must survive a view change.

When a failed replica comes back online it catches up with other replicas and rejoins replication.

VR uses three sub-protocols that work together to ensure correctness:

Nodes are in normal state in absence of any faults and process incoming requests. All replicas participating must belong to same view (same view number) if any receiver is different view then:

Backups monitor the primary: they expect to hear from it regularly. Normally the primary is sending PREPARE messages, but if it is idle (due to no requests) it sends COMMIT messages instead. If a timeout expires without a communication from the primary, the replicas carry out a view change to switch to a new primary

There is no leader election as such to choose a new primary. The replicas are numbered based on their IP addresses: the replica with the smallest IP address is replica 1. The primary is chosen round-robin, starting with replica 1, as the system moves to new views.

Correctness Condition: All Committed operations must survive view change and should be present in log of new primary.

Operations are committed only after primary receives f+1 PrepareOK messages from replicas, that means even if primary fails, the new proposed primary would know about this operation as it will also query f+1 replica and operation will be present in log of at-least one of these replicas because of Quorum intersection property.

A view change may not succeed, e.g., because the new primary fails or is network partitioned. In this case the replicas will start a new view change, with yet another primary.

Here we examine what happens when primary fails in different scenarios. A primary failure will always be fallowed by a view change which will elect new leader and bring state back to normal. 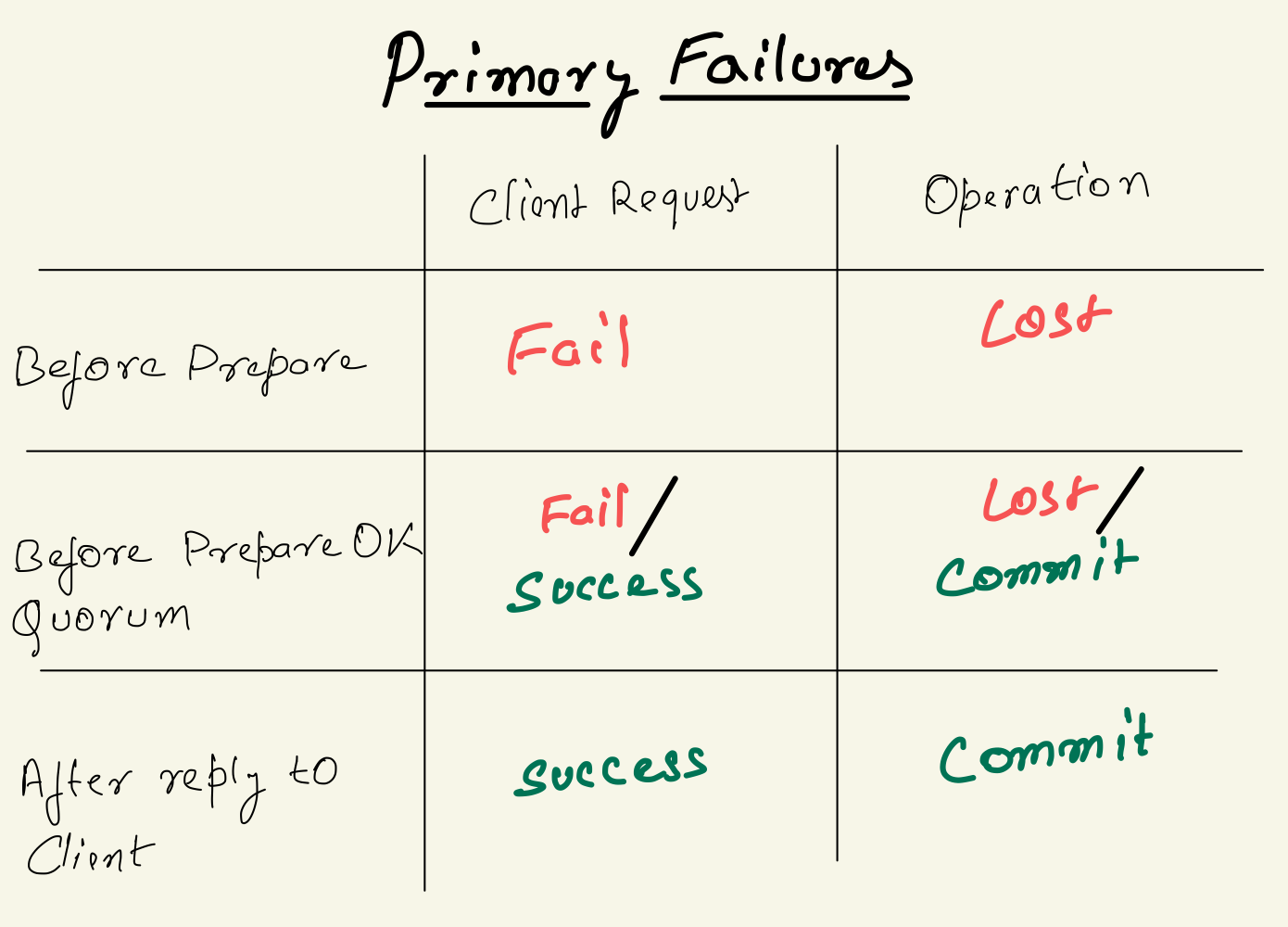 1. Primary fails before sending Prepare message to any replica:

No replica received Prepare message and has no record of operation in its logs and no reply to client as primary failed.

2. Primary fails after sending Prepare message to replicas but before receiving PrepareOK from f+1 replicas:

This Operation was never committed by primary but any number of replicas could have received Prepare message and would have prepared the message in its logs. There could be multiple factors determining weather this message will survive a view change or not.

b. If number of replicas with prepared message < f +1:

If number of nodes with prepared message is < f+1, not enough to apply quorum intersection property. During View Change quorum nodes with Prepared messages may or may not take part in in quorum depending or various reasons like node failure or network partition. 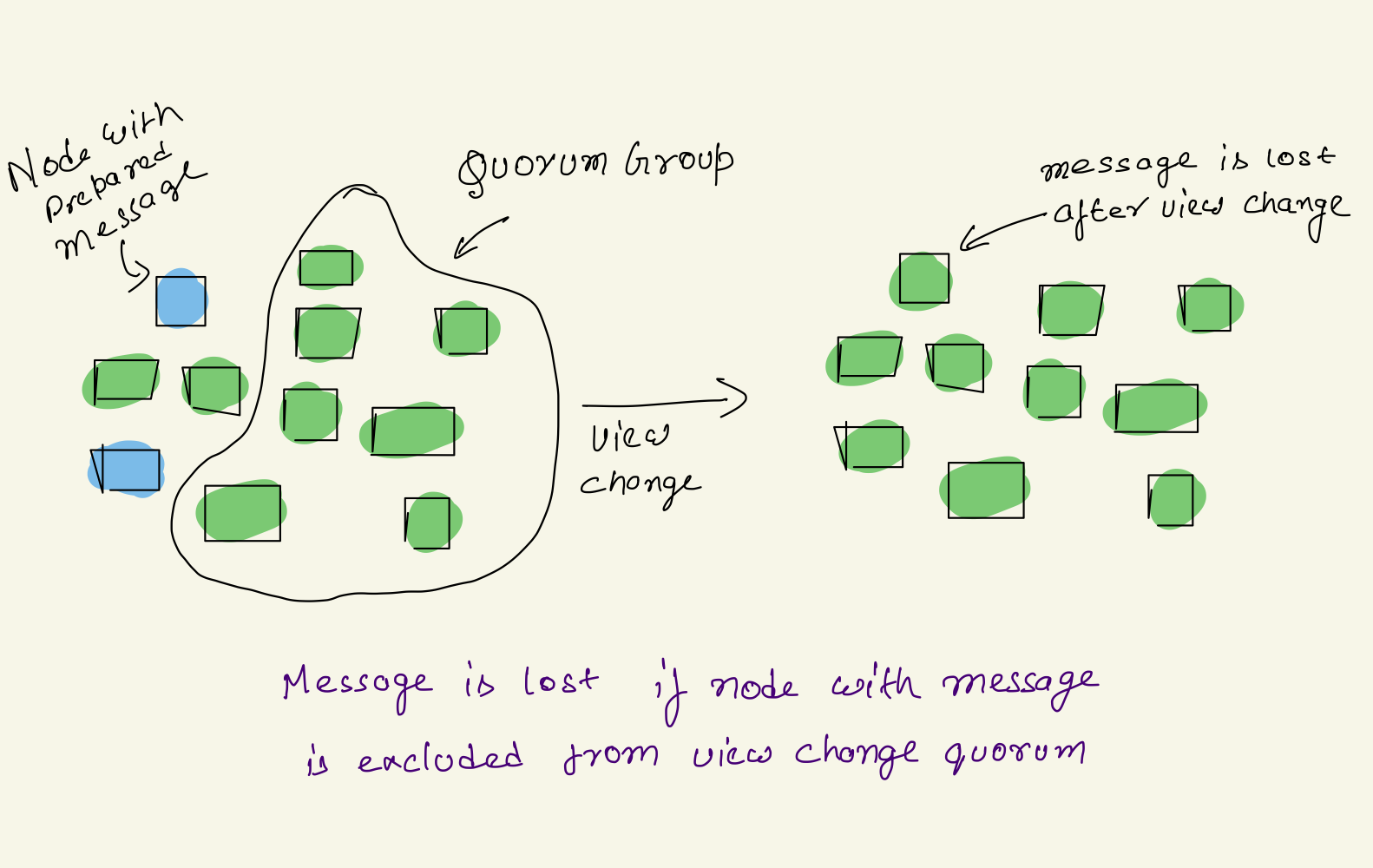 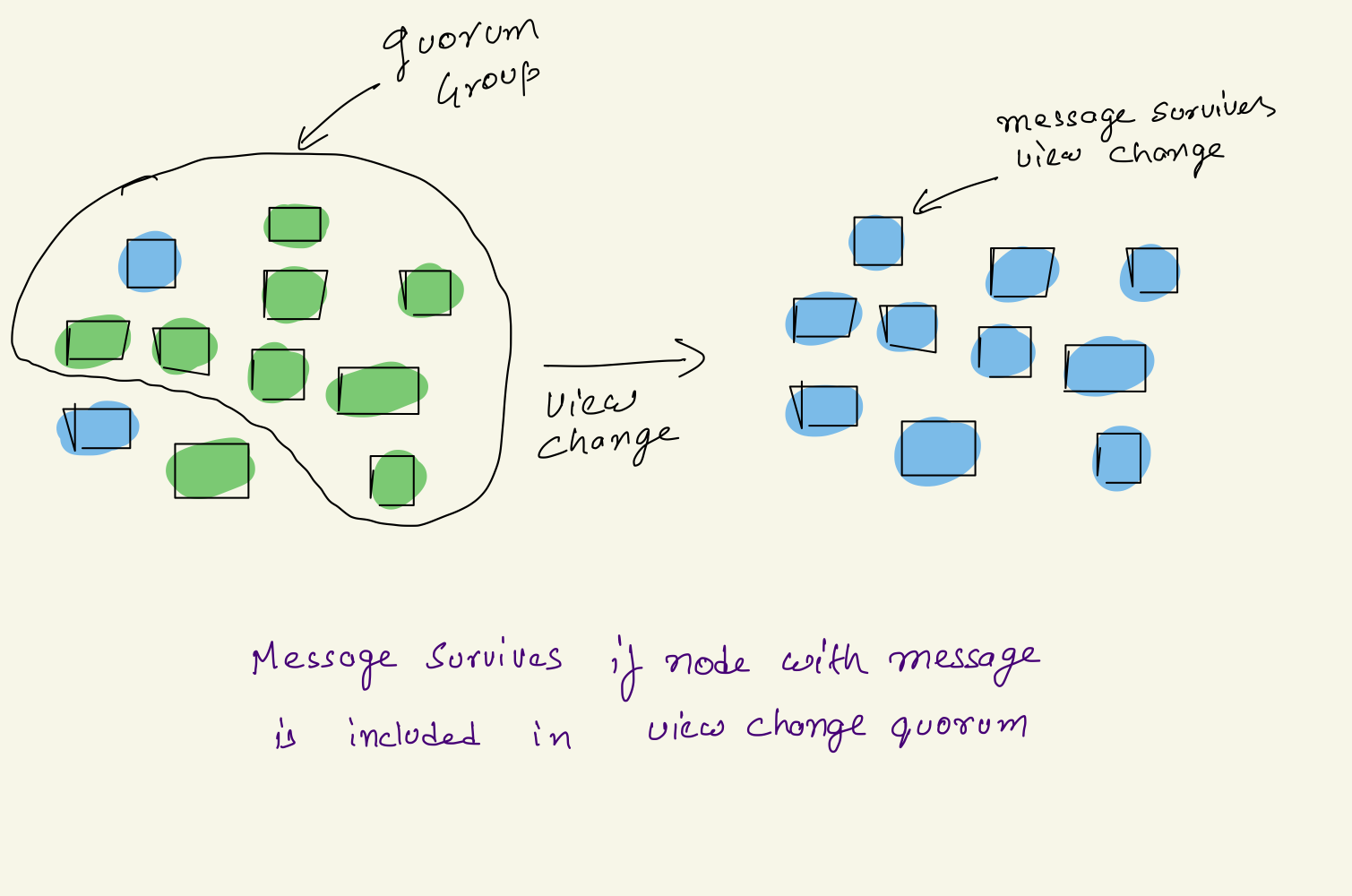 Primary only sends reply to client when it has received PrepareOK from f+1 replicas and committed the message, if f+1 replicas have the Prepared message then it is guaranteed to survive view change same as condition 2.a.

In VR, nodes do not write to disk while normal operation as it makes operation expensive, instead it relies on other nodes to sync its state. When a node recovers from failure it does not go to normal state but goes to recovery state and retrieves logs from other nodes using recovery protocol over network.

If all nodes with a committed message fails at same time, then that message would be lost as no other nodes knows about it. VR assumes that its highly unlikely that all such replicas fail at same time.

The protocol uses the nonce to ensure that the recovering replica accepts only RECOVERYRESPONSE messages that are for this recovery and not an earlier one.

VR does not need disk while performing any operation and during recovery it needs to transfer complete state from another which can be time taking when state is large. To optimize data transfer during recovery nodes can checkpoint their state to disk at regular intervals with checkpoint number (op-number)

Read operation cause no change in application state so need not to go through Viewstamp Replication systems but only can be answered by running itself.

Having the application running on primary perform read requests unilaterally could lead to the read returning a result based on an old state. This can happen if the request goes to an old primary that is not aware that a view change has occurred.

Reads at the Primary

To optimize reads and prevent a primary returning results based on stale data, leases are used. The primary processes reads unilaterally only if it holds valid leases from f other replicas, and a new view will start only after leases at f + 1 participants in the view change protocol expire. This ensures that the new view starts after the old primary has stopped replying to read requests, assuming clocks rates are loosely synchronized.